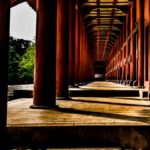 The following is a list of UNESCO World Heritage sites in South Korea, with links to posts about the ones we have visited.

Since our visit to South Korea was limited to Seoul and the DMZ, we did not get to see as many Unesco World Heritage sites as we would have liked. But we loved Korea and hope to get back soon. Seoul, in particular, offers an amazing variety of cultural touchstones, UNESCO recognized or no.

We have visited hundreds of Unesco World Heritage sites throughout our travels. For an ongoing updated list of the sites we've been to, click here. This list is being updated as we go.