I love Spain. I've visited here, off and on for the last 38 years, for a total of nearly four years, including six out of the last nine months. It doesn't get old. The charming incompetence in so many things that Americans take for granted, such as street signs or plumbing maintenance, is welcomed as an exchange for food that tastes better, bars on every block, and big smiles when you can speak to them in their own language. And, when you go to see the bulls, leaving your American attitudes behind, that is their language.

I freely admit that I was first attracted to Spain by reading Hemingway. The Sun Also Rises, For Whom the Bell Tolls, and Death in the Afternoon make up perhaps the best English language explanations of Spain I've run across. Especially Death in the Afternoon, which is all about bull fighting, and most important, how you should look at it and recognize what is good and bad about it.

I've seen perhaps six or seven corridas (bullfights) in my life. Most of those were in the late 70s in Madrid and Barcelona…back when Barcelona had corridas. We saw some good ones, and some bad ones. We saw some brave bulls and toreros, and we saw other days when the bulls and toreros seemed to be running away from, rather than toward, each other. I have photos, in the form of slides, that I took then. The one I remember most was of the torero kneeling in front of the bull, with his hand on the bull's forehead. That's showmanship, true. But it's great big balls of courage, too. Sorry I can't show that photo to you. I'll dig it out of storage some day.

In the meantime, I'll offer the attached photos taken a couple of weeks ago at the Feria de Abril in Sevilla, and a description of what goes on at a corrida, and you decide for yourself if you want to see one in person. (BTW, here's some more on the Feria in general, if you don't want to read about bulls.)

First, I should say that you should spend money on tickets, large money. (We paid 87€ each for ours, which is high Feria prices. Normally, the good seats are about half that.) They used to sell tickets based on whether your seats were in the sun or shade. The more expensive seats were in the shade, and if you've ever been in southern Spain on a hot Sunday afternoon, you'll know why. Now they don't denominate them so crudely any more. You buy reserved seats and what you want to look for is how close you are to the main box. That's where the honored guests sit, usually the old nobility, and the other wealthy people from the city. You want to sit there, not only for the shade, but because most of the action will be performed close to the aforementioned patróns, and you will be the unintended beneficiary if you've spent the money on the good seats.

Another note: go to the Plaza de Toros yourself to get the seats, instead of to one of the multiple brokers scattered over the city. You don't need to pay the commission, and except for big fiestas like the Feria or the San Fermines in Pamplona, you'll be able to get the good seats at the Plaza. Buy them in advance, though, to be sure.

Get to the corrida a bit early. That's a good idea, because the Plazas are old and the idea of leaving legroom and aisles to move people around wasn't current when most of the plazas were built hundreds of years ago. Buy a cushion for a euro or so, too, or you'll be sitting on bricks for two and half hours. You'll see the mozos raking and watering the arena, much like the groundskeepers do to the infield before a baseball game. The band will be warming up, and entertaining the arriving crowd with that trumpet and drum music you've all heard before. The bands are quite good.

When it's time, the toreros will appear. Each of the three matadors–the men who will actually kill the bulls–will enter the arena at the head of their cuadrilla (team) to the accompaniment of bright music. They'll do a little walk around the arena to acknowledge the crowd, especially the patróns, and then exit again to the accompaniment of more music until it is their turn.

The first cuadrilla takes up their place on your side of the arena. When the time for the first bull approaches, all will go a bit quiet. You'll be sitting directly across from where the bull will enter, and they'll post his name and weight in kilos on a placard above the corral door. There will be a trumpet fanfare and one of the attendants will open the outer gate from the bullpen to the arena. He'll wave his hands a couple of times to attract the bull. Then he'll run like hell and jump up on the barrier to get out of the bull's way as he charges into the ring.

Usually, the bull runs out toward the middle then comes to an abrupt halt. He's in completely unfamiliar surroundings and before him are four men on foot. If the bull has been raised properly, he's never seen a man on foot before. He will only have seen men on horses. Each of the four toreros will take their turn attracting the bull and allowing him to pass under their large rose colored capes. At this point, all they are doing is getting the bull used to charging the cape. This goes on for a few minutes until it is time for the picadors.

There are two picadors. These are men on well padded horses who enter the ring to another fanfare. The horses are blindfolded so they cannot see the bull. The picadors position themselves slowly at opposite sides of the arena. One of them will be pretty much right in front of you in the good seats. This is the one who will do the work. The toreros will then attract the bull and lead him to the picador in front of you. The bull will try to gore the horse, and the picador, who is often a very stout and strong fellow, will try to hold the bull off the horse by using a very long lance that he'll stick in the bull behind his shoulders and lean as hard as he can to discourage the bull from the horse.

The purpose of this is to begin to weaken the bull, and also to get him to begin to drop his head. Also, during this stage, the bull will reveal his tendency to hook to the right or left as he tries to gore the horse. This is vital information to the men who will continue the fight on foot.

The lance has a guard behind the point which prevents it from entering the bulls body more than an inch or so. This is repeated for a second time until the toreros on foot entice the bull away from the horse into the middle of the ring. The picadors then exit the area to more music.

Next are the banderilleros. There are two of them and their job is to stick brightly wrapped barbed sticks into the bull's shoulder area. They way they do this is to stand in the middle of the ring with the sticks raised above their heads and shout and stamp their feet until the bull charges them. As he does, they move toward him as well, taking a slight angle which will allow them to lean over the bull's horns and plant the barbs–all the while hoping the bull doesn't quickly raise his head and catch them. The best of them go right over the horns to deliver their strike, and the crowd recognizes the brave ones with a shouted “Ole!”

Three sets of banderillas are placed by the two men. They exit to applause as the matador enters.

For the first time, the bull and the single matador are alone in the ring. Instead of the large rose cape of the first stage, the matador carries a smaller deep red cape called a muleta. Unlike the capes of the first stage, which are manipulated with both hands, this cape is held out from the matador's body with a stick which his swings with only one hand. He begins by attracting the bull to the cape for a series of veronicas–the maneuver where he passes the bull's horns very close to his body without moving his feet. Again, the crowd recognizes the matador who actually passes the horns within inches of his stomach, rather than just leaning in after the horns have passed. The ones who do the former are rare.

The matador continues in this manner until the bull tires, and until the matador has shown his bravery by taking the bull down both sides, and even with his back turned sometimes. Sometimes, as I mentioned above, he will take passes on his knees or even approach the bull closely enough to pat him on the head. Now it is time for the kill.

The matador takes a long sharp sword from one of his team. It's double edged and bent at a downward angle about six inches from the tip. This is to allow a smoother entry. The matador will position himself right in front of the bull, hold the sword aloft in his right hand, and sight down the blade of the sword at a point between the bull's shoulders. He'll entice a charge with the muleta held in his left. They move toward each other. The bull's head goes down to the muleta, and, if all goes well, the matador will lean over the horns and place the sword up to the hilt into the precise spot between the bull's shoulders which will lead the bent point right to his heart.

If the matador had done it right, the bull will have perhaps 30 seconds before he drops dead. If not–if the sword hits bone or otherwise does not go in–other attempts will be made until there is success. If, after the sword is in, but has missed the mark, one of the cuadrilla will step in with a short sword or knife and cut the bull's spinal cord behind his head. This is done to the whistles of the crowd, who are showing their disapproval of a matador who couldn't do the job himself.

This killing stroke is not easy though, and it is when the matador most proves both his bravery and skill. To hit the heart, the matador must go right over the horns to place the sword. If he veers, he won't be able to reach the right place. And if the bull raises his head too early from his charge into the muleta, the matador will be caught. We saw this in the first bull in Sevilla. It's both an exciting and terrifying moment as the bull, who has not died yet, spends his last moments trying to gore again and again the matador he has on the ground. Our matador escaped with only a nasty goring in the thigh. He was unable to do his second bull, but the crowd recognized his valor, and he was rewarded with an ear and prolonged applause. 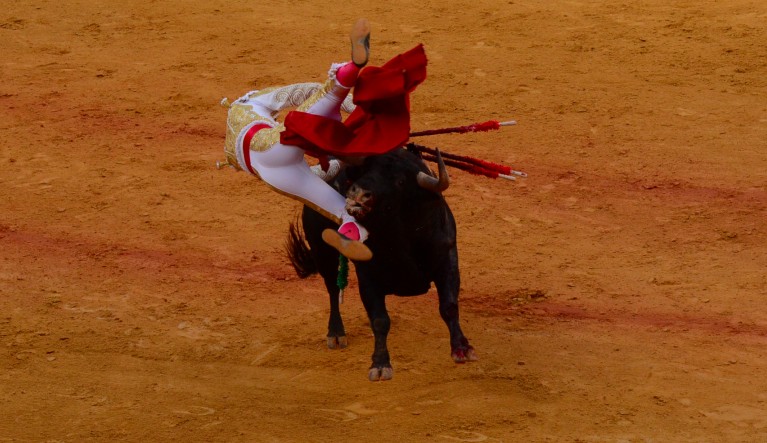 1 thought on “The Bulls”