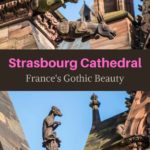 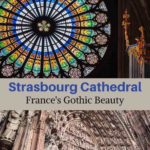 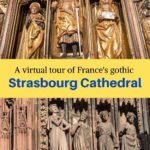 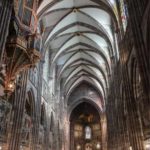 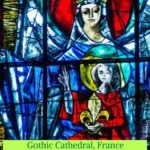 Some History of the Strasbourg Cathedral

The French literary giant Victor Hugo (who wrote The Hunchback of Notre Dame and Les Misérables,) called the Cathedral a “gigantic and delicate marvel.” This Gothic style marvel was built on the site of a Roman temple over the course of more than three centuries. It was begun in the 12th Century and the spire was completed in 1439. The nave alone took more than a century to complete. When finished, it was the tallest building in the world, and was visible from the Black Forest, across the Rhine River.

When you look at a cathedral like this, with all its icons, you have to keep in mind that, in the 14th Century most people couldn’t read. So, all this statuary and painting on the west front was necessary to tell the story of Christianity to the masses. Imagine a priest standing in front of this door explaining, “Ok, the one in the middle is the Virgin Mary, Our Lady, and the mother of Jesus. That’s why the cathedral is called La Cathédrale Notre-Dame de Strasbourg, which means the Cathedral of Our Lady in French.”

On the door to the right of the main door, there is a group of statues called the four foolish virgins. Two of them look rather silly, one of them is angry, and the other seems rather sad. How does the priest explain these? I’d probably say something like, “I’d be pretty sad and angry if I were a virgin.” But I’m not a priest.

Also pictured below the foolish virgins are the statues of the original “wise” virgins. These statues have been removed to the Cathedral Museum, where I took their picture. (They’ve been replaced by replicas on the facade of the Cathedral.)

For some reason, they’re all carrying cups. Perhaps of wine. If they keep drinking that wine, they won’t be virgins for long.

A detail of the front door. These are replacement statues for the ones damaged over the ages. The originals are in a basement of the cathedral.

The Gargoyles are lots of fun

Throwing up sculptures of comic animals and demonic looking gargoyles are the height of the gothic art. And in contrast to all these pedantic saints and bishops, they provide what most would call comic relief. You can’t be serious and saintly all the time, no?

These figures are all on the south side of the outside of the cathedral, decorating all the flying buttresses. They’re around the corner from the west façade, so there’s no confusion with the saints.

I especially like the unicorn. If that’s what that is. If that’s a horse face, though, it’s a very strange looking horse.

Note the buttresses are topped with lots of bishops and other types of religious figures, so as not to give the gargoyles top billing.

The bishop-topped flying buttresses. I love saying that out loud.

Inside any Catholic cathedral, you'll expect to see many depictions of saints. I like Saint Catherine a lot myself. You know it’s Catherine because she’s always pictured with a wheel. She was supposed to be tortured to death on the wheel, but when she touched it, it disintegrated. But, not to be deterred, the Roman Emperor Maxentius ordered her to be beheaded. Joan of Arc, the great French saint, claimed to have spoken to Saint Catherine in a vision, so Catherine shows up in France a lot.

The other tableaux are altar pieces from smaller chapels. However, they’ve been moved out of the chapels and put on display next to the main altar. It's nice that you can see them a lot better this way.

A side altarpiece, including Saint James the Apostle, (Santiago in Spanish, Saint Jacques in French,) in both of his incarnations as a pilgrim and the Moor Killer. I don't know who the guy on the right is.

Three more random saints. It's hard to keep track unless you're very versed in the iconography. I'm only sort of versed.

This is the wall of the apse behind the main altar. The altar itself is nothing special.

The fantastic window is by the French artist Max Ingrand, and was installed in 1956, replacing the original destroyed by American and British bombs in 1944. Oops. There's a detail of the window at the top of this post.

I don’t really care that Ingrand’s window doesn’t exactly fit with the rest of the medieval windows. It’s simply beautiful.

The rest of the stained glass of the cathedral was saved, ironically, by the Germans who removed (stole) it from the cathedral and stored it in a salt mine in Germany. The windows were recovered and restored to the Strasbourg Cathedral by the now famous Monuments Men of the American and British military. Only fair, I guess, after we broke so much other stuff.

Not much you can say about the spectacular rose window, other than it’s beautiful. The fantastic colors are made even more dramatic when set off against the reds, golds, and blues of the organ hanging on the wall.

I usually don’t like to use use vertical shots because you can’t see them in their entirety on a computer screen. But, there’s no other way to show this. So, scroll away.

Some Window Details, and an Ivory Sculpture

As I mentioned above, the stained glass windows were mostly saved by the Germans during the war because they stole them and put them in a salt mine. Still, after many years, they required restoration, and in some cases, replacement. Here are a couple of photos of restored windows that are in the adjacent Cathedral Museum..

There’s a lot of good small stuff in the museum, including many paintings, and lots of gold trinkets made by the local gold workers guild. They were a talented bunch. One of the goldsmiths was named Bartel, by the way.

There was also this small ivory carving of the “penitent” Mary Magdalene. Why she has been portrayed as a whore in the Christian tradition has always been a mystery to me.

The Astronomical clock is an amazing piece of machinery which you have to see in operation. It does it’s thing, complete with crowing cock and parading apostles at 12:30 every day. You have to pay €2 to see it move, which is kind of fun, except that you have to stand through a 20 minute movie of the most pedantic Christian drivel about the end of time in order to see it. I wish they’d let you see the internal workings, too. They would be a lot more interesting to me.

Strasbourg Cathedral reaching to the sky

For several hundred years, the Strasbourg Cathedral, at 142 meters (466 feet), was the tallest building in the world. Even now, it’s the sixth highest church. Pretty stunning, however you look at it.

We visited Strasbourg, France, for three days in November 2014. The entire center of the city is designated a Unesco World Heritage site. We did a lot of looking around the town, but I was drawn back to the spectacular masterpiece of Gothic architecture for at least two hours on all three days of our visit. Even at that, I don’t feel like I saw it all. I certainly didn’t photograph it all.

5 thoughts on “The Strasbourg Cathedral, France”