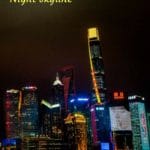 If you can stand all the pushing and shoving of the millions walking along The Bund in Shanghai, you can get up to the riverside rail and get a photo of the colorful and architecturally distinguished modern skyline.

It's right out of Blade Runner, if you ask me. The moisture, the pollution, the noodles, and, most of all, the projected advertising face on the Kyocera building. Eerie at best. Frightening and foreboding at worst.

The pointy building on the left side of the photo is the Oriental Pearl Tower. It's a television broadcasting tower. The tall building on the right, behind the Kyocera Building is the Shanghai Tower, the tallest building in China, and the second tallest skyscraper in the world.

This is the view from the Fairmont Hotel down the river promenade known as The Bund. It was holiday week in China, and there were an estimated 5 million Chinese tourists in Shanghai. That's on top of the 24 million who live there. And, as you can see from the photo, most of them were taking an evening stroll along the river. The Chinese army was directing foot traffic. Really. And strictly enforcing one way walking. Walking in that crowd was a Chinese experience I won't forget.

If you go to Shanghai, China, the first thing you have to get used to is that there are always millions of people. Always.

But the view of The Bund is worth it. Ships on the river, an amazing modern skyline on one side of the river, and the 19th Century colonial architecture on the other, including the Fairmont Hotel where we stayed at the end of our Viking River Cruises tour. The view is so spectacular, The Bund and its architecture has been named a Unesco World Heritage site. It's a beautiful and stunning contrast to the skyline of the Financial District across the river, which was mostly built in the last 20 years.

The best way to get a feel for the immensity of Shanghai is to get a look over it. This is the view from the 84th floor restaurant of the Park Hyatt Hotel in the Shanghai World Financial Center. It was kind of them to let us press our lenses up against their windows to get these images of Shanghai. This is the Jinmao Tower. It was the tallest building in China from its completion in 1999 until 2007, when it was surpassed by the Shanghai World Financial Center

How the hell do they wash those windows, anyway?

But we went up the World Financial Center instead of the Shanghai Tower, because, well, they charge about $15 to have a look off the larger building. And, I liked the views from this one just fine.

Finally, here's a look at the trio from human level.

The great views of the city of Shanghai are endless. It is, after all, one of the most exciting cities in the world. And not just visually.

You can also get a lot more information about the spectacular changing architecture of Shanghai by taking a Context Travel tour while you are there. We did, and loved it.

This is an update of a post originally published in December 2016.