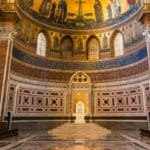 If you said that St. Peter's Basilica is the Pope's “home church” in Rome, you'd be wrong. In fact, the Pope's chair (cathedra in Latin, hence the English word cathedral) is at St. John Lateran Church, outside of Vatican City.

The original church was built in the 4th Century, just after Emperor Constantine legitimized the Christian Church in the Roman Empire. St. John Lateran is actually the oldest church in the Western Roman Empire. But over the years, and because of a couple of fires and an earthquake, the church was entirely rebuilt, and today is an enormous mostly 18th Century Baroque masterpiece, which you can see a bit of here. And, it's a fitting setting for the papal throne.

The half dome of the apse, over the papal chair, maintains an earlier style, derived from the Byzantine, called Cosmatesque, after the Cosmati family, the Italian masters of mosaic. So in the shot, you see the mosaic half dome and the inlaid decoration of the Pope's throne and platform, flanked by the two organs set into their more “modern” decorative style walls.

The Archbasilica of Saint John Lateran is notable for a few reasons. First, it's the oldest church in Rome. Second, as I mentioned above, it is the actual seat of the Pope, his “home” church. And third, while it's outside the boundaries of Vatican City, it is the property of the Vatican and so enjoys “extraterritorial” status, much like an embassy in a foreign country.

The church actually dates from the time of Constantine, the first Christian Roman emperor, who donated the site to the pope in 313. It's on the original site of the oldest church in Rome. The term Lateran, by the way, comes from the Lateranus family of ancient Rome. Constantine confiscated their properties in the city and gave them to the nascent Church.

The church of St. John Lateran has been rebuilt many times. The current version was built in the early 18th Century and exhibits the style of the time: neo classical, with at nod to the Baroque and an homage or two to the Romanesque. All in all, slightly confusing, but the scale and execution make for a spectacular presentation.

I particularly like the mosaic dome above the Baldacchino, the marble surrounds of the Cathedra, or seat of the pope, and the statues of the Apostles (plus Saint Paul) that line the nave. The patterned marble floor is pretty cool, too. The parts add up to a beautiful whole.

By the way, I encourage you to read the comments below for an interesting and enlightening discussion of the terms cathedra, seat, and chair.

Saint John Lateran is one of the “extraterritorial” properties of the Vatican in Rome that are part of a designated UNESCO World Heritage site in Italy.

Saint John Lateran is also one of my 28 Things to See and Do in Rome.

If you're looking for tours in Rome, and it's often a very good idea to take a tour because 1) you can often skip the lines, and 2) you might learn something. If you take one of the tours you find below, Travel Past 50 will earn a small commission at no extra cost to you.

Powered by GetYourGuide. Become a partner.