When you think of just how dry and forbidding the Atacama desert is, you wonder why the hell anyone would live there. Maybe it makes sense now, because there are things like highways and trucks and bottled water you can bring in from a distance. And maybe now because there are vast deposits of copper and other minerals there, and the export of those minerals is to Chile what oil is to Saudi Arabia.

But, when you think of 3000 years ago, when the best you could hope for was a filthy stream that ran by your mud hut, and that that stream would maybe provide just enough water to drink and to irrigate a plot of corn not much bigger than a typical American backyard, you wonder what the hell were the Atacameños thinking. And, you're hard put to come up with an answer.

Shelter from attack, perhaps? Well, there was some of that, because what other tribe (other than the surpassingly greedy tribe from Spain) would cross the Atacama's scorching days and freezing nights to steal your stuff, when all you had was some rock tools, some muddy water, and some dried corn?

I just bring up the questions by way of pointing out that I have no answers. I suppose people will just live where they live. Who, for example, could explain why people would live in the Middle East, if not for religion? Or today, for oil and religion?

Anyway, people did live here in the Aldea (village) de Tulor about 10 km from the current town of San Pedro, and there are scant remnants of their mud living hits and storage bins. Archeologists have determined that a river ran by here from about 2900 to 2600 years ago, and that was enough to grow a little corn and herd some llamas. Other than that, about all you can see from here is sand which had completely buried the huts and storage bins until archeologists came along and exposed some of the tops. Actually, we were told that they'd dug down to the floors, but the sand just keeps blowing along and filling them in. It seems the archeologists have recently given up and just have left enough exposed to show the tourists.

There are also some more recent ruins in the Atacama that make up part of the archeological tour. The Pukará (fortress) de Quitor was inhabited from the 12th Century right up until about 1540 when a conquistador named Aguirre (not the same one made famous by the Werner Herzog movie, Aguirre, the Wrath of God

–one of my favorite movies, btw) came down here and killed all the defenders and posted their heads on the walls he hadn't knocked down.

The fortress sits on a steep hill above the current river valley…if you can call something about 10 meters wide and 10 centimeters deep a river. But it is enough to grow some grass for llamas, some trees for roof joists on which to pile the paja brava, and some postage stamp corn fields. So, you had a settlement here, and you still do, although I'm guessing the tourist admission charge to the site is probably more lucrative to the few remaining inhabitants than the corn. 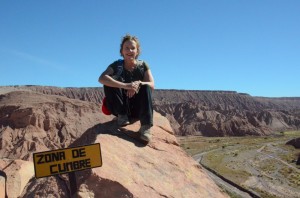 The climb up to the top is certainly a lot easier than some of the climbs we made in the high Andes in Peru…albeit a bit drier. (The main thing all the tour companies in the Atacama tell you is bring a hat and water. Good advice.) It only takes about 15 minutes to scramble up the hill. Kris, as usual, led the way while the rest of us stopped to gulp water and take pictures. The guide mentioned to me that Kris was “energetic.” I told her that Kris was “media cabra”–half goat.

Another thing worth remarking about the Atacama is that its altitude, dryness and remoteness make it one of the earth's premier sites for observing the heavens. As a tourist on the ground, all you have to do to see more stars than you've probably ever seen before is just go a ways out in the desert away from San Pedro at night. You can see the Milky Way with your naked eye. Of course, if you're a professional astronomer, this is like, well, heaven. There are two large-scale observatories in the Atacama. One of them just released its first set of pictures. Pretty cool.

2 thoughts on “Looking Back and Forward in the Atacama Desert”