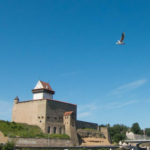 We ask, every chance we get, what the reaction in Estonia is to the recent events in the Ukraine. Does Estonia fear it will ‘be next,’ annexed back into Russia as in the Soviet era?

The answers are approximately the same, whether they come from younger or older people. “We are always afraid. We are always cautious. We are always prepared.” In a country so young, the recall of Soviet times is very fresh. While Russia throws its weight across other borders, the topic of Russian aggression and the potential Estonian response is a common topic of conversation.

Today, we can stand in Estonia and photograph across the border to Russia. Even more impressive is the fact we can feel proximity of the border from here. It’s embedded in the daily life and mindset of Estonians. When you look at a map, you can see the problems inherent in its geography. (For a condensed history of Estonia, situated just south of Finland and west of Russia, see my summary below.)

Although technically independent since 1920, Estonia is really only 23 years old, emerging from the Soviet Union in 1991. The border with Russia runs from the Baltic Sea, along the Narva River, through Lake Peipsi, and further south, for a total of almost 300 kilometers (183 miles). Russian speaking communities remain on the west shore of Lake Peipsi, in the town of Narva, in Tallinn neighborhoods, and in pockets across the country, including Saaremaa Island on the west coast, where a Soviet base and activities precluded Estonians from visiting their own resort area for decades.

Many signs are in Estonian and Russian; menus often in Estonian, Russian, Finnish, and English. Visitors can see remnants of Catholic, Lutheran and Russian Orthodox churches. Small villages show signs of German, Scandinavian, and Russian architecture. Manor homes and country estates, primarily of the German nobility, were dismantled, and many are now museums or luxury hotels.

At the quirky Käsmu Maritime Museum in the ‘sea captain's village' on the shore of Lahemaa National Park, resident/manager Triin Saks describes experiences that have created part of the Estonian psyche.

“If you had a couple cows and a sheep, you were considered too rich, and sent to Siberia. After World War II, one brother might be celebrating the Russian victory because he served with them, and another brother who was forced to fight with the Germans was sent to Siberia, or executed.”

The Baltic coast area we walked along that day was, for many years, fenced off and guarded heavily as the northern border of the Soviet Union, taking the fishing livelihood, boat-building, naval training, and sea-based recreation–every sort of access–away from residents.

“If the children maybe took a quick swim, the parents would go along behind them to brush away their footprints in the sand.”

In various sites around Estonia, KGB museums are busy tourist stops and successful reminders of the secrecy that has defined recent generations. Of course, said our guide in Tallinn’s Hotel Viru KGB Museum, any knowledge of the 23rd floor (the KGB’s office) was denied. It didn’t exist.” The elevator goes only to the 22nd floor, and we walked up from there.

Estonia is now part of the EU and uses the Euro currency. More to the point, it is a member of NATO. A sense of security is cautiously being recognized, mostly because of the promise of NATO support should its independence be threatened. (As our student/guide at the Old Observatory in Tartu pointed out, however, Tartu University’s enrollment of 18,000 far outnumbers the country’s troop count.)

Even this optimism is new, just like the country and its alliances. As a well-travelled friend of mine quipped, “I’ve always wanted to visit Estonia, ever since I learned it existed, that is.”

The Vikings wanted to cut through Estonia to get to Kiev and Istanbul. Christians wanted to save the heathens to the north. Then Danes and Swedes tussled until the Germans worked their way in, in the mid 16th Century. Shortly thereafter, Ivan the Terrible decided Russia should expand westward. German, Polish, and Scandinavian forces pressed back. And so on for another 200 years.

At the time of the Russian Revolution, Estonia (who had been enlisted to fight with Russia in World War I) was ostensibly dropped from Russia like an unwanted Czar. However, while theoretically independent as of 1918, Estonia was immediately embroiled in a war of independence against the persistent Red Army. With support from British, Danish, Finnish, and Swedish troops, Estonia was finally victorious. In 1920, the Tartu Peace Treaty recognized Estonia’s independence and Russia renounced its sovereignty.

But not so quick. World War II came along. Germany and Russia agreed to carve up Eastern Europe. As part of this, Hitler allocated Estonia to Stalin, and, again, Russian troops were sent to Estonia to impose their politics on the people. Tens of thousands of Estonians were forced out of the country, to fight, to flee, to labor, to be exiled, and to be killed. So when Hitler abnegated the treaty with Russia and moved East, some Estonians were glad, right up until they were conscripted to fight for Germany. Some fled and joined the Russians to fight the Germans. Of course, the Russians eventually prevailed, and Estonia was right back where it started, under the Russian thumb. At the end of the war, Estonia was subsumed into the USSR, and those who had fought, even unwillingly, for the Germans, ended up in Siberia. Estonia remained a Soviet “republic” until the collapse of the USSR in 1991, when it declared independence. Estonia joined the European Union and NATO in 2004.

18 thoughts on “Glimpses of Estonia Past and Present”