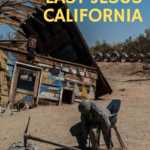 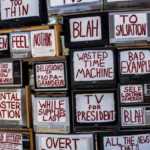 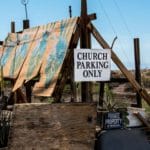 Here's the thing about the desert: it really wasn't meant for people to live in. That's why the few people who do live there do so by their own determination.

The second is similar to the first, except it's perhaps even more pure. The desert is for people who already are apart, in the way they think, from other people. The hostile location is more a manifestation of that solitude, rather than the other way around. It's not that you can't create this sort of desert in your own head, mind you. But if you could, it wouldn't look too different from this.

Here, you'll see the almost aggressive poverty of the town of Bombay Beach, where there's no sense of welcome at all. After that, there's Slab City, an old Marine base that's been squatted on by everyone from unconverted hippies to downright ornery and dangerous loners who warn you off their space with signs promising your imminent death by large caliber weapon if you should approach them.

And, at the end of the road, is East Jesus, which seems to make you sort of welcome–if you're not staying long.

East Jesus is a museum. It's even an officially sanctioned museum, according to its tax status and some paperwork filed with the state of California. But, it's unlike any museum you've seen before. It's more of what most people think of as an art installation, an art oasis, or a performance space. East Jesus itself calls its exhibit space an “Art Garden.”

It's definitely art, very interesting and accomplished art, made, it seems, almost exclusively from detritus scavenged from the society it's set itself so far from. Artists who live off the grid use the raw materials of the very grid as their canvas.

But, in a larger sense, it's a museum of a way of life that is set apart from society. If you've ever admired the paintings of daily life by Vermeer, Steen, and de Hooch in Amsterdam's Rijksmuseum, you should admit that the sculptures of East Jesus are the modern equivalent of those artists' comment on our interaction with our items of quotidian existence–with the overarching sense that said existence is based on non stop information bombardment, perpetual production of perishable hardware that delivers that information, and the sense that the perceived connection via those machines is, at best, fleeting, or, at worst, utterly illusory.

Is that cynical? I don't think so. After meeting Greg, who kindly showed me around the “backstage” area of the site, and doing some reading of the excellent web site, I have come to the conclusion that the artists who live here, or drop in occasionally to work here, are dead serious about creating an enduring body of work that makes eloquent comment on the life that they choose. And the life they choose to leave behind.

If anything, that's why the desert provides a solar powered backdrop for this sort of art, a backdrop that's better than any other landscape–and certainly better than any stately building. The harsh environment requires a resolute clarity of anyone who wants to come here. And, the relentless sun just brings that clarity into higher relief. That's what you'll see at East Jesus.

It's worth the long, dry, drive.

If you go, be sure to also stop in to Salvation Mountain, only a little over a mile away. It's no accident that the so-called great Western religions grew out of the desert. Because the desert affects the brain. If you're out there too long, you begin to see things. And believe things. Things that come out of the nothingness of the desert and become real. Or at least real enough to make someone like Leonard Knight want to make something like Salvation Mountain.

A lot more info on East Jesus can be had from its website. As I learn more, I hope to add a bit more to this post about the artists who work here and the few full time and part time inhabitants of East Jesus. In the meantime, please read the website about the founder Charlie Stephen Russell and the Chasterus Foundation, which actually runs the place now. For amusement and information, I highly recommend reading the “Survival Guide” before you consider a visit. In the meantime, enjoy some photos I made of the art. 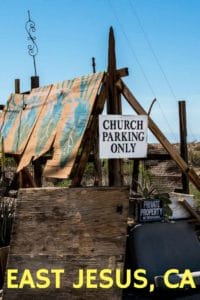 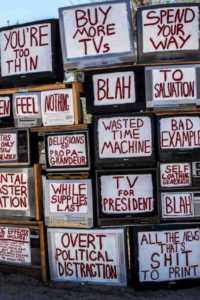 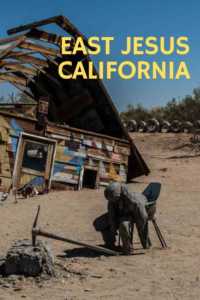