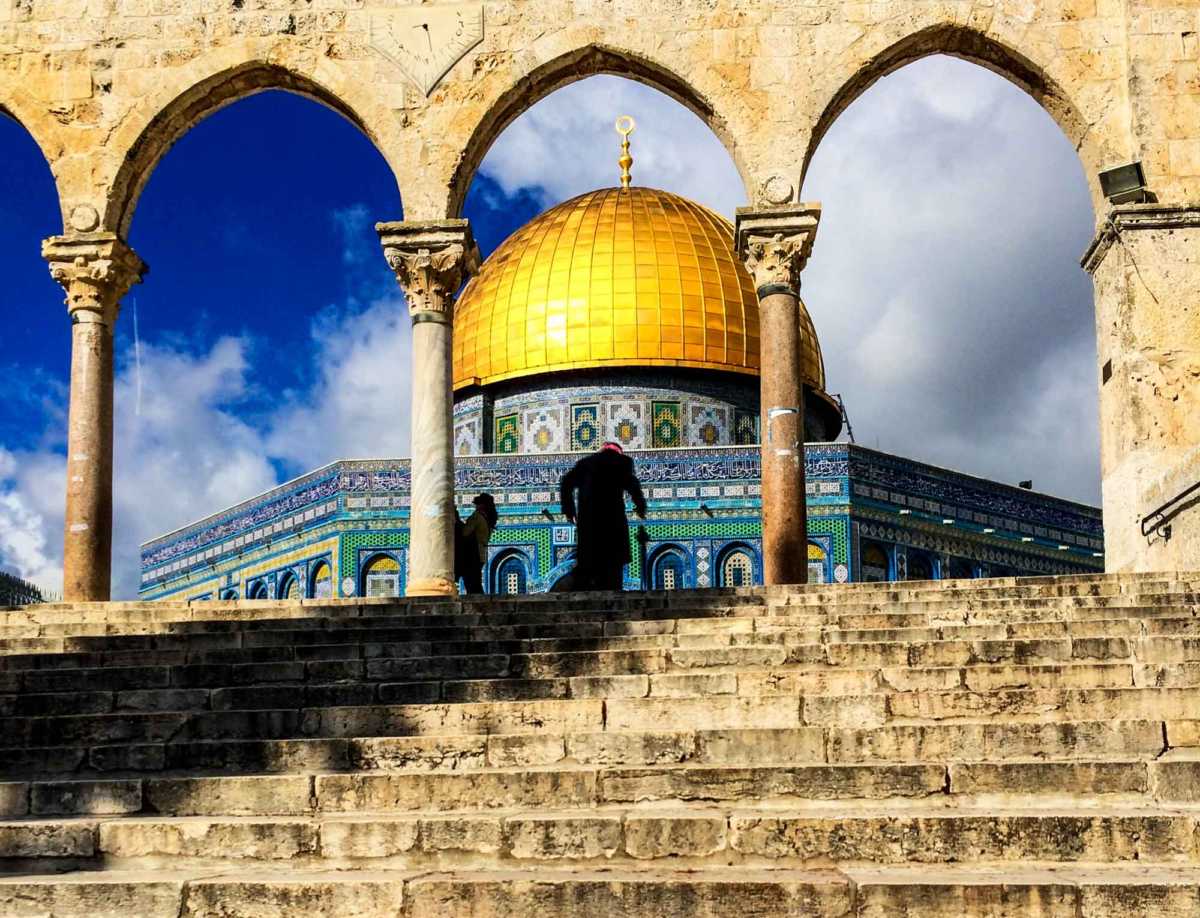 The Dome of the Rock, built on the Temple Mount in Jerusalem is one of the holiest sites of the Muslim faith. Muslims believe this is where Muhammad ascended into heaven. Unfortunately, it is also one of the holiest sites of the Jewish religion, as Jews believe it was both the site of the Second Temple and the spot where Abraham prepared to sacrifice his son Isaac. For a while after the crusades it was also a Christian church. Now, I would say it mostly serves as a focus point for the religious conflicts that permeate this part of the world.

There are signs, posted by the Jerusalem rabbinate, which announce a religious prohibition for Jews to enter the site, because of it being the former location of the Holy of Holies, the innermost sanctuary of the Jewish Temple that was destroyed by the Romans in 70 CE. Since nobody was allowed in the Holy of Holies, and it's precise location cannot be determined since the Temple's destruction, the entire Temple Mount is off limits to Orthodox Jews.

Non-Muslim access to the area of the Dome is limited to certain hours, and no non-Muslims are permitted to enter the Dome itself or the nearby Al-Aqsa Mosque, another revered Muslim site. The hours are closely regulated and very limited, and visitors to the area of the Dome and mosque are unceremoniously herded off the site at 1:30 in the afternoon, as I found out from personal experience. As I was exiting the square and stopped to take one last photo, I was curtly reminded to hurry up and get moving by one of the Muslim guards.

Getting in to the area is not a welcoming experience either. You must pass through a rather rigorous screening, including questioning by Israeli police and passing through a metal detector. I saw some people who were carrying prohibited items, including any non Muslim religious articles, brusquely turned away at the checkpoint. Most have to show their passports in addition to undergoing questioning. When asked where I was from, though, and answered the United States, I was waved along without having to show mine.

I took this shot with my iPhone using the Pro HDR X app. If you haven't checked out that app, and you like to use your phone to take photos, I'd definitely look into it. As I recall, it costs $1.99, which is one of the best deals in photography. This shot is straight out of the phone as is. Pretty nice app, and handles the sky exposure problem right in the file. No need for Lightroom manipulation.

You can buy prints of my photos–or just look at past photos–on my Travel Photos page.

2 thoughts on “Not Visiting the Dome of the Rock, Jerusalem”