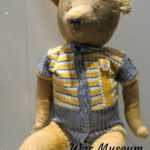 When I was very young, I first heard my father mention Bastogne. I had no idea what he was talking about, and had no idea what or where Bastogne was. It was only later, when I took an interest in the history of World War II, that I learned about it, and what it meant to have been there on Christmas 1944.

My father was a member of the 5th Ranger Battalion. As you might know, the Rangers and the Airborne were given all the hardest jobs that could be handled by small units. I once asked Dad why he’d volunteered for the Rangers, if he knew they would always be in the worst of it. “Well,” he said, “I figured the best way to avoid getting killed was to be the best soldier I could be, and have the other best soldiers around me.” If you read Steven Ambrose’s Band of Brothers about one company of the 101st Airborne, you’ll find that those soldiers expressed nearly the exact same sentiments.

According to records I found of the 5th Rangers, they’d been attached to an armored division headed for Bastogne and were serving, more or less, as a vanguard that would make first contact with the enemy and then call up the big guns. Dad never went into too much detail of how this led his squad to actually reach Bastogne just in time to get surrounded there with the 101st. When I asked him how he got separated from the main force, he just said, “As usual, we were lost.”

Again, because he was a real combat soldier, for much of his life he didn’t offer any detail of what Bastogne, or any other battle, had been like. The only tale of Bastogne I did hear was when I got to tag along when he went to a memorial service in 2006 for one of the men in his squad. I got to have lunch with Dad and his best friend from his unit, Zel Rice. They both told the story of when they were in the woods outside Bastogne being shelled by the Germans. He and Zel both jumped for the hole when the shelling started. One shell hit very close and the concussion knocked Dad’s helmet flying, right into Zel’s face. Both of them were knocked silly by the blast and it took them a minute to recover. When they did, Zel told me he said to Dad, “Shit, Bartel, I thought that was your fucking head.”

Dad said he figured out at Bastogne the two things that every soldier should know in order to stay alive: Never share a foxhole with someone who is braver than you are; and Try to look unimportant, the Germans might be low on ammunition.

It would be hard to improve on the tiny bits of information of what it was like to be at Bastogne during the Battle of the Bulge that I got from Dad and Zel, but the people who live in Bastogne now have done an admirable job with the new Bastogne War Museum.

The basic supposition of the museum, and the right one I think, is to try to explain the Battle of the Bulge to people who had no direct contact with people who were there. They do this in a few ways that work very well.

First, of course, are the didactic displays at the beginning that offer a basic course in the lead up to the war itself and then moves quickly on to the German invasion and occupation of Western Europe from 1940-1944. The narrative is enlivened with cinema news from the era, as well as everyday and military objects that give the visitor a good idea of what life was like for Belgians of the time. The third phase, and the primary focus of the museum, is the period from December 1944 to the end of the war in Europe five months later. This time is when Belgium, and particularly the area around Bastogne, suffered the most. To enliven the static displays of the war material, you also get two interactive scenes: one of the forest outside the city where the American soldiers took a terrific pounding; and the other of a tavern in the city where the locals took refuge during the bombardment.

These scenes are narrated by four “characters” who lead you through the various exhibits. Through these characters, you get to hear descriptions of the battle from the perspective of an American soldier, a German soldier, a 13-year-old boy from Bastogne, and his school teacher–all of whom are just trying to survive. These civilian characters reminded me that my Dad once said that he always felt so sorry for the civilians. “They were always caught between us and the Germans, and they had it tougher than we did.”

Along with these narratives are carefully placed video screens which show interviews with eyewitnesses to the battle of Bastogne. Particularly poignant was the testimony of a Belgian man who described how some of his friends from a neighboring town had been shot by the Germans for collaborating with the Americans.

The combination of the elements make for innovative way to guide you through a museum, and along with the excellent collection of artifacts, both civilian and military, you get a visceral sense of what it must have been like to be there. Two I recall particularly were a Sherman tank with two German shell holes, and a pile of American helmets, just like the one my dad wore, that had been shredded by bullets and artillery shrapnel.

My father’s not around to tell his stories any more. It’s a true service that there are museums like the Bastogne War Museum to keep those stories alive. Maybe hearing them enough will help stop the next war.

P.S. I want to give special thanks to Mathieu Billa of the Museum staff for guiding us through the exhibits, and more important, marking for us on a map the forest where Easy Company of the 101st Airborne (and probably the lost squad of the 5th Rangers) were pinned down. We drove out of Bastogne to that bit of wooded area, and also to the German war cemetery just down the hill. Wandering those very quiet sites were even more emotional than the Museum.

22 thoughts on “The Battling Bastards of Bastogne”