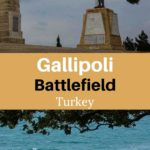 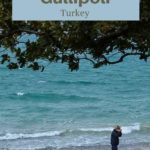 As you may know – and perhaps all you may know about the Battle of Gallipoli – is that Gallipoli is an Australian movie from the early 1980s starring Mel Gibson. It was the fictionalized story of two Australian friends who bought the line of the English about how sweet and fitting it was to die for your country and so joined the Australian Army at the beginning of World War I. (Spoiler alert: as usual, the Aussie army ended up, like the Irish before them, doing the shit jobs in the British wars.)

The non-fictional part of the film was the attack on the Gallipoli peninsula, by the Brits, supported by the Aussies and New Zealanders, near the beginning of World War I. The main idea of attacking Gallipoli, promoted by the then British Lord of the Admiralty Winston Churchill, was to knock the Turks off their own land that commanded the Dardanelles Strait so the British Navy could sail up the Dardanelles to the Bosporus and shell Istanbul into submission. Then, according to the plan, the Brits could get into the Black Sea and supply their ally, Russia. Like a lot of British plans in a lot of wars, this one didn't turn out so well.

Many of them were blown to bits and are lying unidentified in mass graves, but there are some neat rows of tombstones in several old battle sites where you can read the names of the 20-year-old boys who came half way around the world to some place they'd never heard of and got killed on the first day of the battle, or on the assault at The Nek, or some other time before the Brits finally realized the plan was stupid and pulled out the men who hadn't yet been killed.

So, this made a pretty good movie directed by Peter Weir, and Mel Gibson looked pretty good as a young Australian, which he was at the time. The film wasn't as anti-war as it should have been, but it wasn't bad either.

Gallipoli today is a peaceful place. The Turks have declared the entire peninsula, more or less, a “Peace Park” and have prohibited building anything bigger than a farm house. Most of the area that isn't the well-kept grave and memorial sites or the occasional olive orchard that had been there for hundred of years, is grown back into the rough vegetation that was there when the Commonwealth troops landed.

It's rough country, and full of ambush valleys flanked by steep hills that are marvelous places for defensive Turkish gun emplacements. Up on those hills, too, are the remains of trenches and tunnels occupied by the Aussies and Kiwis and Turks. In some cases, these reminders of the brutality and futility of trench warfare are only meters apart. Our guide told us that the soldiers would sometimes throw smokes and chocolate to each other when they weren't killing each other with machine guns.

One of these valleys was called The Nek, which is Turkish for a little low spot between two hills. That's where the most famous part of the battle occurred. It's the part, too, that's the climax of the movie. The Brits shelled the Turkish positions for half an hour to drive them out of their trenches, but due to a timing error, the Aussies in the trenches just below the Turkish positions didn't attack the empty trenches until seven minutes after the shelling stopped.

In that seven minutes, the Turks got back into position and mowed down four waves of Aussies as they came out of their trenches. Most of them made it no more than a few yards before they will killed. An observer who came upon the battlefield a few months afterwards remarked that the shallow graves of the thousands of fallen soldiers were “so white with bones it seemed as if there had been a recent snow.”

It was a sobering day–one of those days where the history is recent enough to still affect you and carry the weight of what happened a little back to our lodgings.

We spoke to a young Turkish man back at the hotel where we were staying about out visit. His job is to arrange tours for people like us, but particularly for the 10,000 or so Australians and New Zealanders who come to Gallipoli each year to see their forebears' memorials. “Yes,” he said, when I remarked at how young most of the men were who had died. “In war, the old men talk and the young men die.”

I would be remiss if I didn't mention our guide, Izzet Yilderim, who was a remarkable student of the battle. He knew every date, every unit name, every commander and every disposition of troops. If you should want to go to Gallipoli, I encourage you to find him on Linked In and retain his services. Your visit will be ten times better with him than without.

Izzet also had a real sense of the horror and irony of war. He took us to the place of the furthest advance of the Australian troops, at the top of the tallest point on the peninsula, where the troops got a brief glimpse of their objective–the Dardanelles. They lasted two days on that hill until the Turks counterattacked and drove them back. There were a lot of grave markers there.

We had not been encouraged by our Turkish acquaintances in Istanbul to make the trip to Gallipoli. There's not much to see there, they said. Istanbul and places like Ephesus are much more interesting with much more to do and see.

That is true. There isn't much to see at Gallipoli except the stark white grave stones and larger stark white stone memorials to both sides' boys who were killed here. But, I'm more glad to have seen it than any of the art of Istanbul.

Note: this is an update of a post originally published in 2011.

A visa is necessary for Americans to travel to Turkey. We use iVisa whenever we need a visa for any country. Great service, and a small price to pay for them to navigate the visa process for you.

You can click the link above, or use this widget below to start the process of getting a visa for any country.

12 thoughts on “The Battlefield of Gallipoli, Turkey”