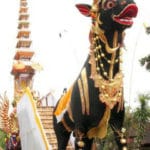 There's an older man who comes by our villa here in Ubud, Bali with his wife a few times a week to do a little gardening while his wife makes smoky offerings to the gods. He's an unfailingly cheerful sort who always has a bit to say, but doesn't hang around enough to become burdensome. Until today, he'd always spoken to us in his rather halting English. But today we discovered by accident that we both spoke Spanish, and the conversation got a lot more interesting.

He was the one who told us last week about Tuesday's traditional Bali cremation ceremony and invited us to attend. And when he came back today, he asked if we'd been there and if we had any questions. Let me describe the ceremony first, so we know what we're talking about when I get to the questions.

When we arrived outside the main temple/palace of Ubud for the cremation ceremony, there were two huge “floats.” (I can't come up with any other word for them in English.) One was of a black bull, and the other was a multi-level tower built on a base of fantastic molded figures of Hindu mythology. Both floats sat upon sturdy, but wobbly, frames of lashed bamboo that rested on the ground. There was a bamboo stairway attached to the front of the tower that led to the alcove below the nine-tiered roof. About 100 men, dressed in gray t-shirts and their sarongs and udengs (head scarves,) sat around the temple waiting for things to get going.

As the hordes of tourists began to assemble with their cameras, a like number of vendors of sarongs, sashes, udengs, and beverages and snacks also arrived as thick as Ubud insects. We fought them off as long as we could, but eventually succumbed. I figure it's a sign of respect, and of not being a typical tourist, to honor the tradition of the local religion and only enter the temple appropriately dressed, which in Bali means a sarong. So, we finally decided to buy from Ita, mostly because she complimented us on bargaining the price of our two sarongs down from $20 each to $5 each, which is still probably more than we should have paid. With the transaction completed, we stood sort of lamely holding the sarongs and our cameras, obviously looking forlorn until another woman stepped up and helped us tie them on in the correct fashion–men tied in the front, women on the side. She also helped me tie the udeng. After we were all tied up, she then stepped aside to reveal her bucket full of iced water and Cokes and sort of suggested that the price of her aid was purchasing one drink each for $1. Since it's always about 90 degrees in Ubud, she didn't have to sell too hard.

Finally the ceremony began. Police officers herded the gapers onto the sidewalk as the gamelan started its hypnotically rhythmic gonging. From  the street emerged a white coffin shouldered by five sturdy pall bearers. They pushed it up the stairway, where it was gathered into the alcove by three other men and tied on with white strips of cloth. Two men stayed with the body while the rest descended.

Then the music of the gamelan intensified as a large group of the men stepped into the frame around the bull, hoisted it to waist level, carried it out to the street and began turning it in wildly scary circles. This went on for a few minutes until they put it down in the middle of the street and rested for a minute.

A truck came along and the stairway was removed from the tower float and tied onto the truck bed and driven off. Then the fun really began. Even more men stepped within the bamboo frame of the tower and, while the gamelan again intensified its rhythm, they lifted the vastly larger and heavier structure and carried it out to the street, where they also spun in a few circles, the top of the tower waving precariously from side to side to the accompanying gasps of the assembled tourists.

The bull spun a few more times, then took up the lead down the main street of Ubud toward the cemetery. The tower followed down the street from which all the overhanging electrical cables had been removed. Then the well dressed Balinese male and female retinue, and finally the horde of tourists. Just as the crowd passed, crews busied themselves reattaching cables to the north side buildings.

We had been told that the actual burning of the bull, tower and body wouldn't take place for a few hours, so, after following for a few blocks, we dropped out of the procession with the intention of coming back for the burning. Of course, the information we'd received wasn't exactly accurate, so we missed it.

Back to the villa. The next morning, Jordi, the older man, told us what it was all about. Jordi, it turns out, is one of just a few Spanish speaking guides here in Bali. (Jordi, which is actually a Catalan name, is the name he took for the benefit of his clients. Like many thousands of other Balinese, his real name is Nyoman.)

Jordi sat down on the floor of our veranda as we were having breakfast and explained that the ceremony we had just witnessed was very expensive, and such pomp could cost so much that only the very rich could afford it. It turns out that this person who was being cremated in this ceremony was a relative of the king of Ubud. We got conflicting stories from other people about whether the body was a sister, or brother, or cousin, but, hey, that's Bali. It's not really important.

What is important is that there is no sadness at a death of an older person in Bali, as Jordi-Nyoman explained. It's only through death that one can make the next step toward the ultimate unity with God that all good Balinese desire. “Of course, we are sad when a child dies,” he said, “because they haven't had a chance to fulfill their dharma yet, and they will have to repeat this life in order to progress.” The cremation, he went on to explain, is part of the process because the ritual provides the ultimate release of the atma–the soul–from the body, which is what holds us back in our progression toward God knowledge.

“But how do poorer people achieve this release?” I asked. “Not everyone can afford such a ceremony.”

It turns out there are mass cremations every three or four years in Ubud. All the lesser folk pool their money and have a ceremony like the one we just watched. Evidently, there is one scheduled in a few months, and Made, another Balinese man we've met, told us he will be burning the body of his mother then. She died four years ago and was buried then. He will dig up her body, as do so many other Balinese families, and carry it along to the mass cremation.

When I asked Jordi if four years was typical for this sort of thing, he replied. “Oh yes. Four years to wait for the release from the body is not so long when you are talking about all of time.”

2 thoughts on “Lessons from a Bali Cremation Ceremony”