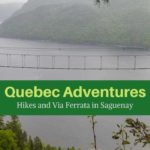 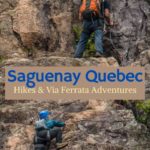 Before we even left for Quebec, we faced some tough decisions. The centerpiece of our visit was a conference of the Adventure Travel Trade Association (ATTA), a group of destination managers and tour operators focused on adventure tourism.

Adventure travel is one of the fastest growing segments of travel, and the target customers are not just 20-something risk-takers, X-gamers, or fitness fanatics. Even the likes of Tom and me are invited to experience the outdoors actively, and encouraged to try some new sports.

Before traveling to Quebec City and on to the gorgeous Saguenay region north of there, we were given the chance to select a day’s activity: hiking, kayaking, cycling, exploring canopies, canyons and caves, zodiac fjord tours, bear watching, rafting and…the Via Ferrata.  What’s this Via Ferrata?

Literally, it’s the Iron Way. In practice, it is rock climbing assisted by cables and other embedded aids like steps and rungs.  It makes rock climbing accessible to any reasonably fit (and flexible) person. I know that now, but hesitated to sign up for the unknown.

People who know us know I’m the outdoorsy one, and love water sports, biking, and hiking. I have an uncontrollable urge to scramble up nearly every hill, cairn, and mountain path. I love heights, and have jumped out of airplanes. But rock climbing has never appealed to me. The idea of clinging to a vertical face while trying to figure out the next toe or finger hold makes my palms sweat.

So for our Adventure Day, I chose a lake side (flat) bike ride through the National Park de la Pointe-Taillon on Lac Saint-Jean, and Tom opted for a fjord exploration paired with bear watching in the National Park of the Saguenay Fjord. Still, I was wondering about the Via Ferrata.

Fortunately, I got a second chance. We were invited to join a four day after-party, a media tour of the Saguenay area right after the conference. Again we could choose from optional activities, but after some back and forth, I signed on for the Via Ferrata.

My first Via Ferrata experience at Saguenay Fjord National Park was with a couple calm guides who slowly introduced us to the terminology and watched us navigate a short, ground-level section of rock. Here we developed the good habit of keeping one harness clip attached to the cable at all times.

Our group of eight or so included a couple experienced climbers, a couple adventurers who were fighting (or trying to ignore) their fear of heights, and a range of fitness levels. I was the oldest in our group and probably in the lower quadrant for fitness. But, as Tom frequently points out, I’m stubborn. And generally fearless.

This first experience was a great beginning, with many rungs and steps affixed to the rock, and sometimes even foot and hand rungs placed together for casual scooting without having to pull on the cables. The reward was reaching the spectacular suspension bridge dangling over a canyon opening onto the Saguenay Fjord. On the bridge we spotted others in our group crossing the fjord in kayaks, yellow ants scratching across a great lake. Hikers (Tom) and kayakers had more of a workout than we did.

The second Via Ferrata, at Les Palissades de Charlevoix, was altogether different. I was intimidated right away by what I perceived as a rushed introduction (we were late getting there), and appreciated that I'd already had a day's introduction. Our guide, François-Guy Thivierge, I only learned later, is a consummate professional explorer, having summitted the highest peaks on each of the seven continents and reached both poles. His company, Roc Gyms, trains athletes for rock and ice climbing.

How lucky was I?! François is enthusiastic, prone to shouting that his Via Ferrata is the ‘most spectacular Via Ferrata in the world!' I fell into the queue right behind François, who let the two good climbers lead. This time, instead of closely connected steps and rungs, we followed a course laid entirely by François himself, from his experience climbing without assistance. The route wound across and up and around the rocks, and we relied only on the cables. With no rungs or steps, the adjustment was finding footing and finger holds against the rock.

It took some time to learn to stay closer to the face and to use the natural footholds, sometimes indicated with red paint. Eventually I realized power in the legs helped, whether climbing hand-over-hand up the cable or stabilizing to adjust clips. This was a more demanding climb but more rewarding, getting a feel for the rock and for François' routing.

The reward was another suspension bridge, this one appearing rickety with oddly spaced wooden planks, sporadic gaps, and Tibetan flags whipping from the upper cable. The surprise finish was the descent: hurray, my first time rappelling (!), a drop of some sixty feet to the rocky canyon bed below.

François and his crew treated us to lunch, but not before showcasing their zip line running over a small lake and back again from a tower. The return trip proved to be a little too speedy for Tom, who was trying out this aerial maneuver for the first time.

Another day we visited a private nature and recreation facility along the cascading Saint-Anne river. Our goal was to try another zip line and get some pictures of our elevated selves high above the rushing water. Looking down, we saw Via Ferrata cables half submerged in the water below the falls, and I hoped that these were closed for the day, or the season. Our mini Via Ferrata was simply designed to access the zip line platform. It dropped steeply under a bridge, and was troubling only because it was unexpected, and straight down to unseen steps.

Here at Canyon Ste-Anne we were introduced to a new type of clip. Instead of stopping to transfer clips one at a time around the cable’s anchors, the single clip can be guided through a horizontal groove without ever coming detached.

By now we were all enthralled with Via Ferrata, and laughing at how ubiquitous they appeared here in Quebec when a week earlier we’d never heard of them. Even more impressive, this was just part of the giant Saguenay playground. Over the four days, we  biked a portion of the famous Véloroutes des Bleuets (Blueberry Bike Trail) (accessible to all including old folks and families), enjoyed some great whale-watching from Tadoussac and the Marine Mammal Interpretation Centre, did a little hiking, and, of course, ate really well.

Combined with a visit to Quebec City (more on that to follow), we suddenly found ourselves huge advocates of adventure travel  in Quebec's Saguenay region. Solve all your travel requirements at once, appealing to city and country mice, foodies and adventurers. Take advantage of this ‘foreign’ trip to a land close by–combined with the good value of U.S. to Canadian dollars– and book a trip.

2 thoughts on “Adventure Travel in Quebec, a la Kris and Tom”