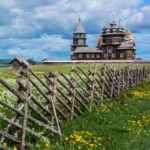 It's hard to imagine a tourist getting to Kizhi Island in Russia other than on an organized river cruise such as the one we did with Viking Cruises–unless you were one of those determined people who is trying to visit every UNESCO World Heritage site in the world.

Kizhi Pogost (Pogost means enclosure) basically consists of a reconstructed village on an island that is about 6 km by 1 kilometer in the northern reaches of Lake Onega, the second largest lake in Europe. To reach Kizhi, our Viking ship had to make a turn north from Saint Petersburg, the opposite direction from Moscow. In other words, a special detour just to visit Kizhi.

The Kizhi Pogost, which is the actual name of the UNESCO World Heritage site, is an enclosed village museum which surrounds two churches. The current settlement on Kizhi is primarily a museum of an earlier rural life, and is centered on the two major churches and a bell tower built on the island in the 18th Century. In the 1950s, many historical buildings were moved from other parts of the surrounding Karelia province to preserve them, and it's those churches and farm buildings which make up the UNESCO site.

Kizhi island grew originally as a trading post and farming community on the route from Novgorod in the south and the White Sea in the north. But as iron ore was discovered on the shores of Lake Onega, the peasants were conscripted into the mines and the settlements on the Onega islands were mostly depopulated. Eventually, the peasants revolted in the 18th Century, and Kizhi returned to its rural roots.

Later, the island was given over to Soviet style industrial farming, but that was halted in the 1970s and the island was restored to its earlier character and established as the open air museum that it is today. The farming that occurs now is, more or less, an exhibit.

We got to go into the larger church, the Church of the Transfiguration, and were treated to a special concert of Russian Orthodox chants by three of the local priests. The domes of the church were being worked on as we walked by, too. I imagine a church made of wood that is more than 200 years old requires constant maintenance in the northern Russian climate.

Unfortunately, we only had a couple hours on Kizhi, so we didn't get to poke our heads into all the structures we saw, but the landscape of the island, along with the threatening clouds that seemed like they were the perpetual companions of Kizhi Pogost, provided many lovely photographs.

You can see our other stories from Saint Petersburg, Uglich, and Yaroslavl from our Russian river cruise by clicking on the links.

Our visit to Kizhi Island was part of our cruise of the “Waterways of the Tsars” Russia river cruise with Viking River Cruises. We were hosted on the cruise by Viking, but any opinions expressed are our own.